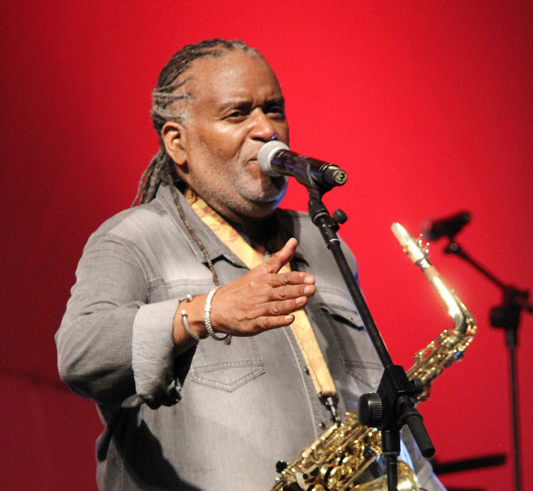 When he began recording in the 1970’s, Dean Fraser was known in music circles as ‘Youth Sax’. He rubbed shoulders with Jamaica’s greatest musicians including Tommy McCook, Ernie Ranglin and Winston Wright.

Now one of reggae’s elder statesmen, he is exposing some of the music’s emerging instrumentalists on Flat Bridge, a 13-song album scheduled for release in May by Tad’s International Record.

While he worked with veterans like drummer Sly Dunbar, bass player Flabba Holt and keyboardist Franklin “Bubbler” Waul, Fraser gives younger musicians like keyboardist Andrew Marsh and trumpeter Okiel Mcintyre a chance to shine on songs like I Command You and Zah Zah, respectively.

Also featured is guitarist Lamont “Monty” Savory, a graduate of the Edna Manley College of the Visual and Performing Arts, who is one of the in-demand session players in Jamaica.

Fraser, reggae’s premier saxophonist for over 30 years, said maintaining a proud tradition was the main reason for recording Flat Bridge.

“One of the things wi losing in our music is the instrumental vibe. Wi have a sound and a style as a Caribbean people, and we should keep the tradition going,” he said.

The songs on Flat Bridge were recorded at Tad’s International Record’s studio in Kingston, Jamaica last year during the Coronavirus lockdown.