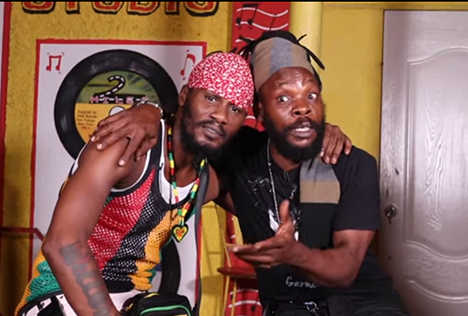 Reggae artists Bushman and Natty King have not been on speaking terms for the better part of two decades. Finally on May 15, 2021, they decided to get together on “TeachDem”, the popular Jamaican YouTube program to speak publicly about the long-running feud between them. Viewers were excited about this interview; to date the episode has attracted over seventy-five thousand views and over a thousand comments.

According to Bushman, the story started in 2002, when he was arrested for gun possession on a trip to Kingston and spent eleven days in jail. A few months later Natty King’s biggest hit to date, No Guns to Town, was released and it was rumoured that the song was inspired by the Bushman’s incident. “My incident happened November 2002 and Natty King song came out early 2003,” he said. “My whole element was me getting caught with a gun and Natty King singing about it”.

Bushman went on to say he believed the dispute was over, until he got a message from friends in Kenya telling him Natty King, while on tour in that country had several problems with him and wasn’t speaking too highly of him. That, he said, forced him to step back from having any relationship with Natty King.

The Teach Dem interview was arranged so both artists could speak their minds and squash the extended feud between two of the parish of St Thomas’ most gifted and popular recording artists.

During the very colourful interview, both artists spoke about several other incidents that may have strengthen their difference. However, in the end they both agreed that the real problems were the allegations and what other people were saying that led to the years of misunderstanding between them. The artists ended the interview singing their favourite songs from each other and promise a combination song in the near future to cement the new friendship.

You can watch the full interview on YouTube @Teach Dem