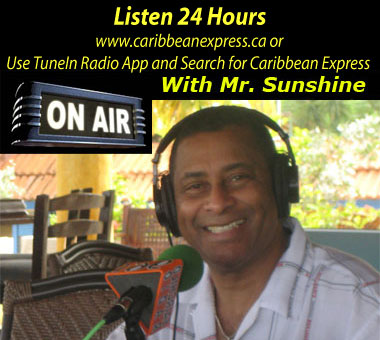 For 43 years, radio DJ Wayne Vernon has been pumping music across the airwaves in Kingston, Jamaica and Vancouver, Canada. Today you can still listen to his charismatic and captivating voice as he presents his Caribbean Express Radio Show worldwide on Mixcloud Mondays-Saturdays @7pm EST, in addition to his 24-hour Caribbean Express Radio @ www.caribbeanexpress.ca

Wayne Vernon was born in Montego Bay, Jamaica. He joined the Jamaica Broadcasting Corporation as a DJ in 1978 hosting his radio show called The Capsule. In 1981, he immigrated to Vancouver, BC, Canada where he volunteered for 16 years at the community radio station, CFRO 102.7FM, hosting Caribbean Sounds on Saturday nights and later producing his show called Super Mix.

On September 7th, 1997, Fairchild Radio acquired a new commercial multicultural station on 96.1 FM and hired Wayne to produce and host Caribbean Express, a popular and dynamic morning show serving the Caribbean communities of Canada and world music lovers everywhere. The show played Reggae, Soca, Dancehall, Oldies and Lovers Rock from all over the Caribbean and highlighted artists who have migrated from the Islands, but still turn out the styles of music from their beloved homelands.

With its many devoted listeners, Caribbean Express quickly became the most popular listened to show at the station Mondays to Fridays between 9 AM-11 AM. Wayne became known as Mr. Sunshine, as on a cold or rainy day he brought warmth and sunlight to his listeners. Aside from playing the sunshine music that couldn’t help but making listeners feel good, he gave updates on news, sports, traffic and weather as well as providing endless support to local event promoters and artists with airtime to talk about their latest projects.

Wayne Vernon is also known for his commitment to playing Canadian content on his show and introducing Canadian artists and their music to his many listeners. Over the years, he has promoted the works of several Canadian artists in Vancouver and elsewhere. Artists such as Tony Anthony, Jimmy Reid, Leroy Brown, Steele, Sonia Collymore, Tanya Mullings, Nana Mclean, Belinda Brady, Ellsworth James, Jay Douglas, Garnett Challenger, Shadrock, Shellane, Daddy Roy, Phase 3 Steel Band, Jahranimo, Zukie Joseph, Sam Hope and Tropical Breeze are some of the artists who have benefitted from his willingness to showcase their music.

His devotion to promoting the Caribbean does not stop with just music. Wayne also became a spokesperson for tourism to the Caribbean namely Air Canada Vacations, Sandals and Beaches Resorts. Having taken Caribbean Express on the road numerous times promoting for Air Canada Vacations, Jamaica Tourist Board, SuperClubs, Sandals and Beaches Resorts in Jamaica and other Caribbean Islands such as St. Lucia, Antigua, he has also broadcast the show in support of the Jamaica Tourist Board from Sunset Jamaica Grande in Ocho Rios and has broadcasted live from Trinidad Carnival, Jamaica Carnival, Barbados Crop Over, Antigua Carnival, St. Vincent Carnival and St. Kitts Music Festival.

In 2000, Wayne Vernon was recognized by TIDCO Canada, a branch of the Trinidad and Tobago Ministry of Tourism for increasing tourism from Canada to Trinidad and Tobago by 7% during Carnival time. In 2005, he was awarded by the Consulate of Jamaica for Contribution to the International Community as a Jamaican living abroad promoting tourism to Jamaica. He has had the pleasure of interviewing many top Caribbean dignitaries including former Prime Minister of Jamaica, Hon. Portia Simpson-Miller, Prime Minister of Barbados Hon. Owen Arthur and Antigua and Barbuda Prime Minister Hon. Winston Baldwin Spencer, Hon. Edmund Bartlett Minister of Tourism for Jamaica.

In 2008, at the 2nd Reggae Music Awards held in Toronto he was the recipient of the Community Appreciation and International DJ Awards and 2010 WRCMA best Radio Program all genre DJ and Life-Time Achievement Award in Radio. According to Wayne Vernon, one of the best accolades bestowed on him was being recognized as one of the top 100 Jamaicans living in Canada. In a book titled ‘Ackee meets Saltfish’ published by the Jamaican Consulate in Canada for the Jamaica 50th Independence celebration, he was lauded for his work for many years in radio broadcasting.

In his 43rd year, Wayne Vernon is still going strong making people happy via the airwaves and at this rate, there is no end in sight for this true radio pioneer.