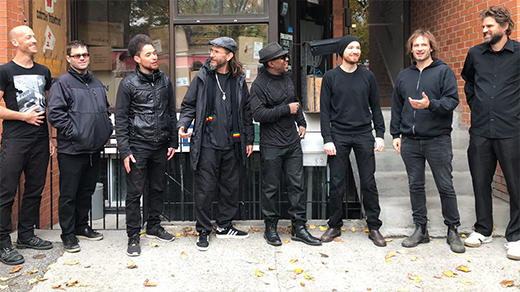 When it comes to reggae in Canada, few bands do it better than The Human Rights. Since its inception, the nine-piece outfit has remained true to its founding principles and remains one of the music scene true lions.

On their new album Reggae Strong, which they recorded with producer and former band member Patric McGroarty, this album finds The Human Rights coming as close as they have yet to achieving a truly Canadian reggae sound. Reggae Strong was mixed and mastered by renowned Canadian reggae artist and producer Dubmatix, and had some assistance from Toronto’s Ras Yunchie, Caddy Cad, Isax, and Carol Brown.

The Human Rights’ authentic sound is on full display with the album’s first single Peace Gun a song whose deep groove and powerful lyrics convey a timely message about the current state of the world. Also, check out the follow up instrumental Peace Sax featuring the versatile hornsman, Isax. Lead Singer Treson gets to shine on the catchy and danceable Tell Me That You Love Me, while other tracks such as the cover version of Sly & Robbie’s Red Hot, which is a remake of Karl “Cannonball” Bryan’s Red Ash pay tribute to Toronto Reggae history. Reggae Strong is also dedicated to their keyboardist Bernie Pitter whose face graces the back of the record.

The Human Rights was formed in 2007 around one of Canada’s most authentic Rasta artist and musician, Friendlyness. They have developed a modern, high energy sound that blends Roots Reggae with jazz, funk and R&B influences, courtesy of a blazing three-piece horn section and the soulful lead vocals of JUNO nominee Tréson.

The Human Rights have performed at most of the major Toronto venues including Roy Thomson Hall, the Sound Academy and Harbourfront Centre, as well as major events across Canada. Their songs have become staples on Reggae radio shows and on CBC programs like Big City and Small World. Fans of the Trailer Park Boys will know them for their version of the Trailer Park Boys’ theme song featured in the movie Don’t Legalize It.