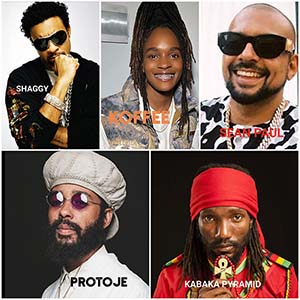 The Recording Academy made the announcement today, November 15th at the 2023 GRAMMY nominations livestream event in Los Angeles.

The Best Reggae Recording award was first handed out in 1985. Since the inception, Jamaican artists have dominated the category with only two non-Jamaican winners; Steel Pulse from England and SOJA from the United States.

There were mixed reactions from reggae fans in 2022 when the American group SOJA won the Best Reggae Album category. Fans are waiting in anticipation to see who will win the category in 2023.

‘Scorcha’ by Sean Paul was released in May 2022 via Island Records.  This is Sean Paul’s eighth studio album. He has been a nominee on several occasions and won the award in 2004 for the multi-platinum ‘Dutty Rock’.

The Sinatra Songbook Inna Reggae Style by Shaggy is produced by frequent collaborator Sting. ‘Com Fly Wid Mi’ hears Shaggy tackling 10 of the legendary actor/singer Frank Sinatra’s best-known songs. ‘Com Fly Wid Mi’ was released in May and will give Shaggy another Grammy nod. He has two wins, ‘Boombastic’ in 1996 and ‘44/876’ with Sting in 2019.

‘Third Time’s the Charm’ by Protoje incorporates elements of classic and neo-soul, rock, and especially hip-hop, but this time around, Protoje strongly emphasizes his Jamaican/reggae roots.

Recorded primarily at Protoje’s studio, The Habitat, located in the hills of Kingston, Jamaica, the tight-knit set features an array of the island’s musical visionaries including featured vocalists like Samory I, Lila Iké and Jesse Royal, and producers like Iotosh, Ziah.Push and Zion I Kings (which consists of Laurent “Tippy I” Alfred, Romaine “Teflonzincfence” Arnett and David “JAH David” Goldfine).  He also tapped the soulful British singer Jorja Smith on ‘Ten Cane Row’.

‘Gifted’ by Koffee is the follow-up to her Grammy-winning EP ‘Rapture’.  Koffee released Gifted through Land Recordings/Columbia Records in March. It made her the first female artiste from Jamaica to place in the top 10 of the United Kingdom’s Official Albums chart.

The 2023 GRAMMY AWARDS will happen live on Sunday, February 5th, 2023, at the Crypto.Com Arena in Los Angeles, California.