When Anthony Richards landed in the United Kingdom over 50 years ago, that country was in the throes of the Swinging Sixties. The Beatles and The Rolling Stones were leaders of a British Invasion that swept the United States. Ska and rock steady music were part of the UK’s melting pot, thanks to a large wave of immigrants from Jamaica which included Richards.

Known in UK music circles as Chips, Richards received a Badge of Honor for over 50 years service to reggae music in his adopted country. He accepted the award on August 5 at the office of the Jamaica High Commissioner in London. Richards received the accolade one year after the Jamaican government announced it but was unable to travel to Jamaica for a modified National Honours and Awards ceremony due to Covid-19 protocols. “I never got into music for awards, just as a patriotic thing. So, when something like this happens it’s like a bonus,” he said.

The 70-something Richards made his reputation in marketing for Trojan Records which was the leading distributor for reggae in the UK for many years. He was part of the promotional muscle that made John Holt’s 1973 album, 1,000 Volts of Holt, a hit there. His relentless drive also helped make Everything I Own by Ken Boothe number one in the UK in 1974. Richards was instrumental in introducing reggae to virgin markets of Japan and Nigeria during the late 1970’s. 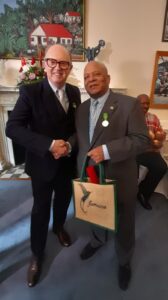 In the last five years, he has acted as representative for many of reggae’s pioneers in the UK who feel they have not gotten their due from Jamaica despite their considerable achievements. Some of these veterans include singer Owen Gray and The Cimarons band. “I’m like a conduit for them at functions. It’s important that these people get their due and I feel honored helping to do that because they are very special to me,” said Richards.

At the August 5 ceremony, influential British broadcaster and sound system operator David Rodigan was presented with an Order of Distinction, Jamaica’s sixth highest honor, for his contribution to reggae.